Cities in the Algarve

Cities in the Algarve is actually nor really a good word to describe the villages in the Eastern Algarve because all places are small. Our biggest “city”, Faro only has around 80.000 inhabitants. Still, we picked our favourite spots for you. The fact that we did not mention Caçela Velha or Monte Gordo, for example, by no means says, that you should not visit it. Our goal merely is to offer some examples of what our beautiful Eastern Algarve has to offer.

Tavira is one of the most beautiful cities in the Algarve. Tavira’s charm isn’t easily captured. Dutch writer Tessa de Loo once described her visit to the town as ‘I came, I saw and I fell in love….’ (In the Dutch newspaper De Telegraaf of 15 May 2010). The town is famous for its narrow, cobbled streets and the bustling Fish Quay with its many chic restaurants and café bars. Take your pick of historic sites or visit the Moorish castle… you’ll soon discover that Tavira more than deserves your time.

The most striking architectural feature is the seven arched Roman Bridge (Ponte Romana), which spans the river Rio Gilão. Once a major Roman gateway, nowadays the bridge is only accessible for pedestrians. Fishing boats lie high when the tide is out and this is the time you see locals wading in the river to fish for clams and periwinkles.

For culture lovers Tavira has a lot to offer. Standing in the central square you can easily spot over 40 churches. The Igreja da Misericórdia is one of the most impressive of them. The renaissance features on both the entranceway and the interior are unique to the Algarve.

A ferry takes you in 15 minutes to the outstretched and quiet beach of Ilha da Tavira.
From the ferry you see storks and flamingos wading through shallow water hunting for fish. Tavira is famous for its salt production and a visit to the saltpans – that stretch for miles along the coast – is worth the journey. 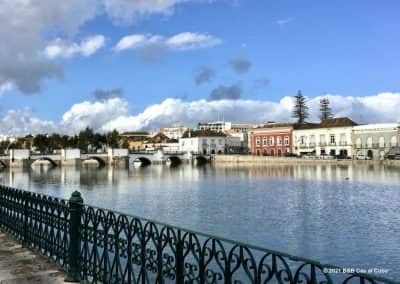 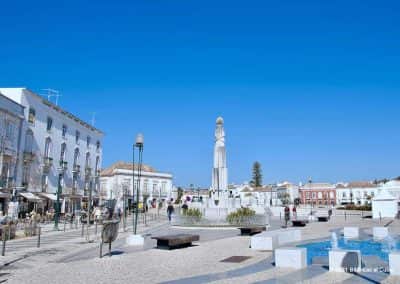 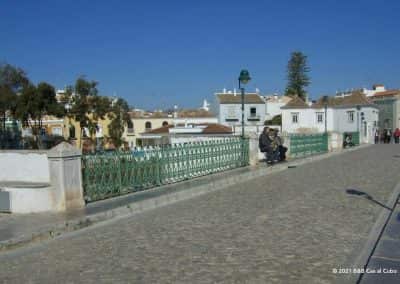 Cities of the Algarve is not exactly the right denomination for the fishing village of Olhão. The Barreta quarter – the old city center near the harbor – shows a Moorish flavor. Wander around the small cobbled alleys with their bright white plastered cubic houses and take in the magic of old times. In May and June storks are found nesting on virtually every rooftop. Every morning there is a fruit and vegetable market in the red market halls. Do not forget to pay a visit to the local fish market where fishermen sell their catch of the day.

Olhão is famous for its cubic (cubo) houses, with its flat rooftops, external staircases and its open box-like chimneys. Even though the village breathes a Moorish atmosphere, the Moors were defeated, long before the town was founded in the 16th century. The Arab elements were actually inspired by the trade with North Africa by fishermen who sailed from the north of Portugal to African cities and their local kashba’s. 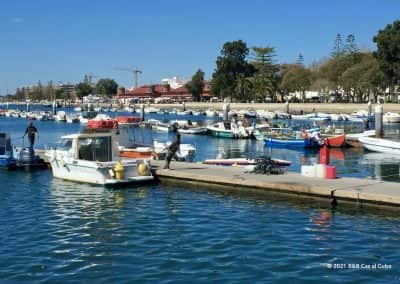 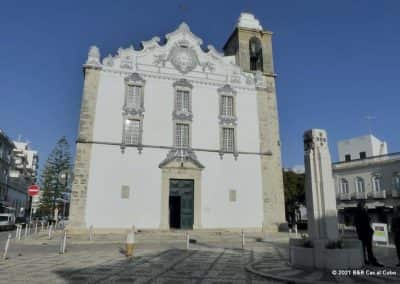 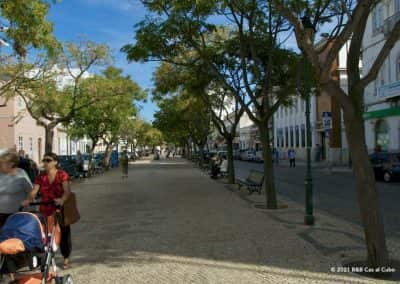 Fuzeta is not one of the cities in the Algarve. It is mainly a village. However not less charming, and certainly worth a visit! The name Fuzeta is spelled in two ways: Fuseta and Fuzeta. So, what is it? Fuseta or Fuzeta, because even some of the official signs for the town switch between the two spellings. The original and historical name was ‘Fozeta’ which came from Foz da Eta. This was derived from the diminutive of ‘little river mouth’. Officially, its name is Fuseta, but Fuzeta continues to be used.

Fuzeta these days, is a real beach town. In the summer it is crowded with tourists, enjoying one of the two beautiful blue-flag beaches. Praia da Fuzeta is the beach, closest to the town center. There is no need to take a ferry because it is on the town side of the Ria Formosa lagoon and within walking distance of the center, shops, restaurants and bars. Due to the fact that it is on the lagoon-side, the water is warmer, and there is no current or waves. non-existent. It’s a great beach for families with young children and is popular with the locals.

Beaches in the Ria Formosa

Praia da Ilha da Fuzeta (Fuzeta Island beach) is the beach on the island opposite Fuzeta. Take the ferry to get there. It offers umbrellas and sun loungers to rent and in the central area, you’ll find a small bar. If you prefer your more private spot, take a right or left on the beach and walk for just ten minutes. You will find yourself virtually alone. The beach is lifeguarded during the summer season and regular boat services run from Fuzeta Marina to Praia da Ilha da Fuzeta.

Back on the mainland, you’ll find open-air restaurants grilling fresh fish at the side of the small harbor for a lovely meal after a day on the beach. One warning: parking is a problem in the summer, so if Fuzeta is your beach, get there early! 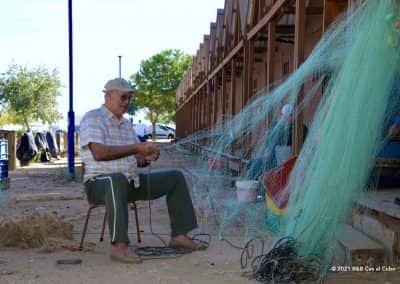 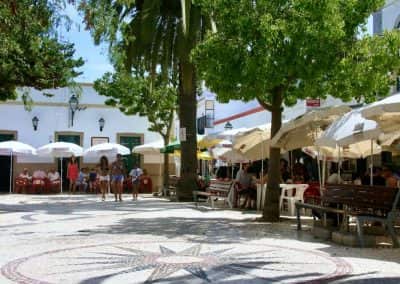 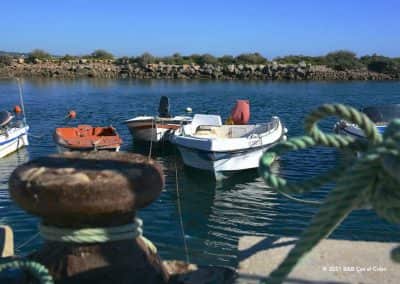 Faro is one of the most interesting cities in the Algarve. If you just head straight for an Algarve resort when coming from the airport, you’re missing the essence of the Algarve. There’s history afoot around Faro’s historic port and historic Cidade Velha – the old town. Algarve’s beautiful capital town is crammed with fantastic shops, restaurants, cafes and bars.

Archaeological findings show that Faro was already inhabited during the Iron Age. The city used to be a Phoenician and Greek trading post and later it became the most important Roman settlement south of the river Tagus. After the Romans, the Moors settled down in Faro for more than 6 centuries until it finally became a Portuguese city in 1249.

In the 18th century 3 earthquakes hit the city. The first one hit in 1722 and the last one, in 1755, destroyed Faro completely. A year later, the ruined city became the capital of the Algarve, Portugal’s most southern province. In the following years bishop Dom Francisco Gomes tirelessly lobbied to make the city prosperous again. You’ll find his statue in Faro’s main square near the harbor. 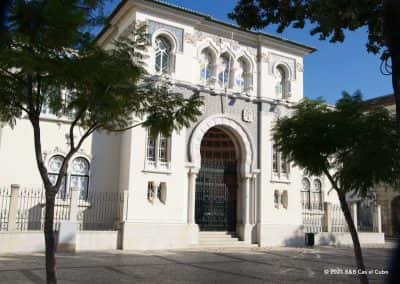 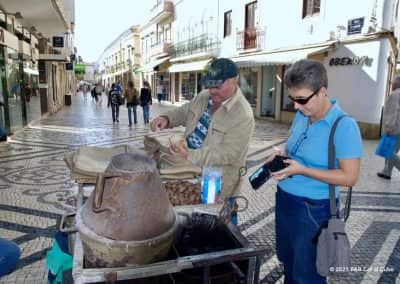 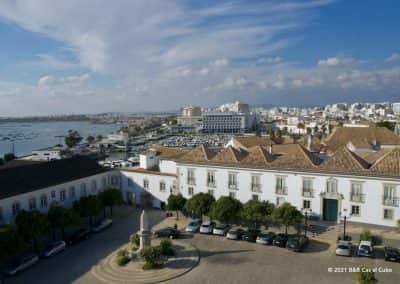 Vila Real de Santo António is one of the cities in the Algarve that  is a border town with Spain. Just across the Guadiana river and a ferry trip away, is the Spanish town of Ayamonte. The ferry used to be the main route from the Algarve to but since the 1990s the suspension-bridge a couple of km up the river handles most of the traffic between Spain and Portugal.

Vila Real de Santo António is built on grid system the town is built on. There is barely a curve in the entire town and every street corner is a precise 90 degrees. The town center and Lisbon’s downtown Baixa district were both designed by the same man and under the same circumstances, so they bare great resemblance. The reason for this, is the destructive earthquake of 1755 and the tsunami that followed. Both Lisbon and Vila Real de Santo Antonio were completely destroyed in this natural disaster. Both cities were redesigned with the symmetrical grid layout of wide streets and uniformly sized blocks

In the center of town is a charming square bearing his name:  Praça Marquês de Pombal. It is a lovely place, lined with cafés and restaurants. In the center stands an obelisk and the calçada paving around it has a radiating pattern. Vila Real de Santo António still remains an important fishing port. Take a lovely walk along the riverfront Avenida da Republica and enjoy the activity in the harbor. Nowadays It also hosts a lot of yachts.

Cities with a beach

If you continue along the Guadiana river, past the lighthouse onto the pier towards the river mouth you reach a 200-meter-long breakwater. From here, faro can be seen on a bright day when you look along the beach. The pier is also a great spot for fishing. 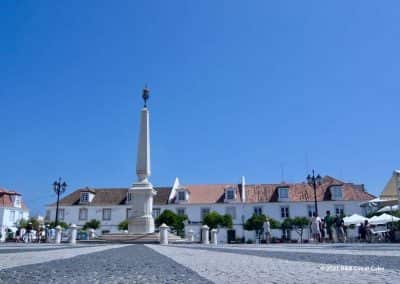 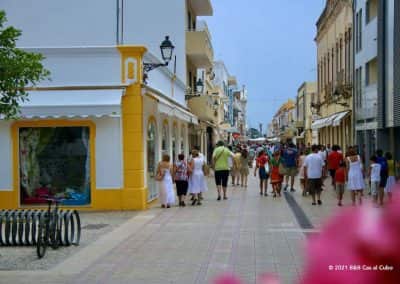 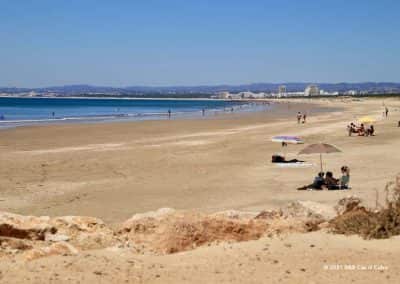 Mertola is only a 45-minute drive away from bed and breakfast Cas al Cubo but shows a totally different landscape. The fortified town of Mertola is perfect for a daytrip. The town is perched high on the banks of the border river Guadiana, in the middle of the Guadiana National Park. offering stunning views over the town and river beyond. Mertola is famous for its fortifications. For centuries Portugal and Spain fought each other for control over this piece of borderland and villagers tried to protect themselves by building fortified walls around their towns.

In the 1960’s Mertola had more than 25.000 inhabitants, but after the copper mine of Mina de Santo Domingo was shut down, many people left. Currently the population is about 8000 people. Mertola has 3 archaeological sites. The Casa Romana is based at an excavation beneath the Town Hall and displays the foundations of an old Roman House. The Islamic Museum shows an impressive collection of pottery from the 9-13th century and the remnants of an ancient Christian church from the 5th century show a large collection of tombstones with inscriptions.

Looking South from the castle walls, rises the Convento São Francisco de Mertola on the other side of the water. In 1980 the Dutch artist couple Zwanikken bought the remnants of the former monastery and restored it to its former glory and made it into an art center. 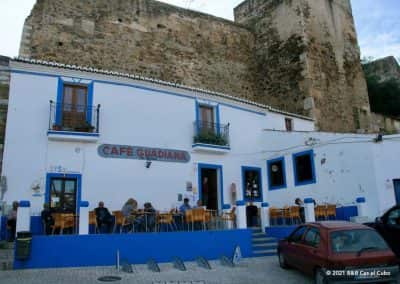 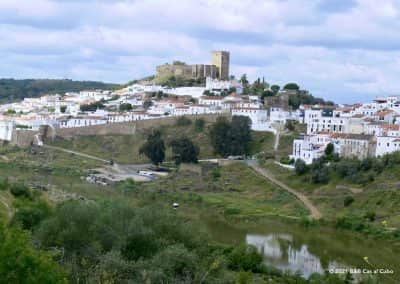 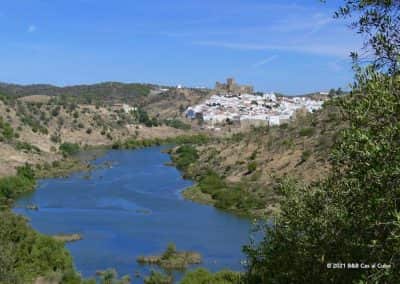